First Dates and the cars that take us there

To say that I love cars is a complete understatement of a real, verifiable fact. I dream of finding that rare, vintage hot rod that only needs a little wrench time and some paint (because who wants to love someone else's color) to be the last truly awesome ride I will ever need. The reality of the situation is simple though: I (more than likely) have many years of car buying and selling ahead of me. 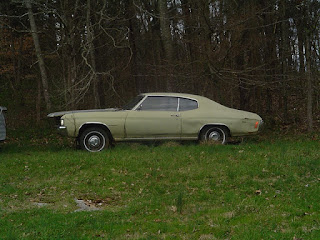 I have had a sick amount of vehicles in my day. My very first ride was a 1972 Chevelle Malibu. I remember her as a sleek sexy ride. She was obviously old when my Grand Father gave her to me in 1992 with the instruction that I had a few years before I was going to be driving and I should use that time to restore her. 2007 (that would be 15 years later) saw me finally selling her, unrestored, since I didn't want to leave her in storage while I spent my time over seas.

I actually let the Malibu go very cheap. I had offers over the years while the old girl was running that ranged from insulting to outrageous. I sold her to a man and his son who planned to rebuild her together. Somehow it felt right. One day I will either find her again or another big bottomed lady like her and I will let the Chevelle ride again. 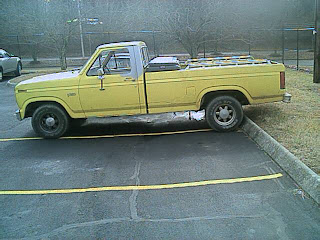 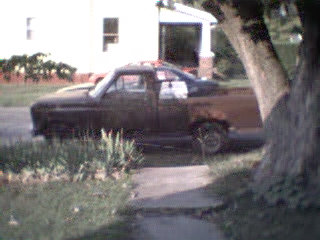 I  had a three or four vehicles before I really fell in love with a car again. My uncle sold me a truck as I was going through my divorce. My little brown 84 F150 was a total beater. I didn't ever really plan to fix it up, but I certainly drove the tires off of it. I loved the truck and so too did my father. So much so that when I found a bright yellow 83 F150 I bought it for him. A year or so later my brown truck died and I scrapped it. Old Yellar is still kicking around, though the time has finally come that I have to decide if I will sell it or fix it up. Dad put it to thought and decided to buy himself another old truck instead of working on the truck. I have to admit getting 10 years out of a $700 investment is probably more than my money's worth.

I loved the trucks enough that I bought two more of them. 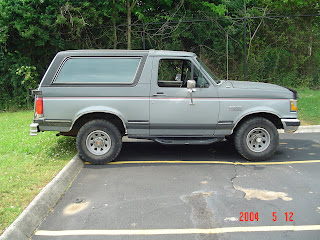 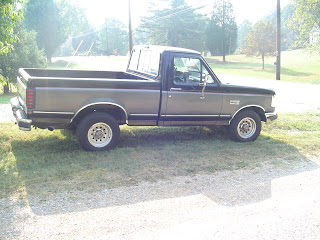 The Bronco was my dream car. It had a 351 Windsor that could pull an ornery elephant around. It was fast and powerful. It had performance exhaust and sounded amazing. I could sum up it's best feature in two words: Convertible truck! Had it only got more than 6 miles to the gallon I might have kept it.

I bought the F150 as an attempt at NOT fixing up the older trucks. It had a built 302 and thanks to my lead foot I found out the bad boy was super quick. I loved it until I had a fender bender and had to sell it to pay off the damages.I still miss those two trucks. 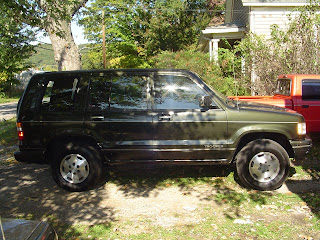 The Bronco did give me something wonderful: a 1994 Izusu Trooper. She has given me about 7 years of good service up until recently when the seals have all started leaking. My spark plugs have all fouled out and my cute, sporty SUV that got nearly 30 miles to the gallon now barely sputters out 10 mpg. Which is why I found myself in great internal debate on the fix it up or sell it front.

I priced an engine overhaul kit. I have looked for rebuilt engines. Ultimately the price of fixing up the mechanical portions of the engine is almost worth more than the Trooper. So I have found myself in a very unhappy position of trying to figure out what to do with my truck. So I talked to my Mom. I talked to my Dad. I talked to my old boss from the parts store. I even passed the time chatting with a few of my customers about my ordeal.

Riding along with my wife I finally blurted out all my anguish about my dying Trooper. I laid out all my confusion and all the alternatives that I saw. I tried to lay out all the logical reasons to do one thing or another. Half way through my rambling the wife gets this cute almost shy little smile. So I asked her what I should do and  she smiled and replied,"Baby we went on our first date in that Trooper. We have to keep it!"

That gave me my answer. While we really didn't go out for the first time in the Trooper we did take it for our first real date. The fact that my old truck is special to my wife makes it worth keeping.

The first time we "went out" wasn't in my Trooper. Ashley has just bought her new Hyundai and even though she was with her ex at the time she took me for a spin in it. We left the store and had a really nice ride (one of the few times I haven't driven) and after 15 minutes or so we ended up back at work. We sat in the car and chatted for a few. I got out as she ran inside to buy something (probably cigarettes). She left with her boyfriend (who had shown up while we were gone) and I was left thinking about the really nice girl with the cute little car.

Our first "date" we ended up meeting up at O'Charley's. I was actually so nervous I couldn't manage to eat. After she ate and I fumbled to look like I was eating we sat for a while in the Trooper and talked until I attempted a horribly awkward first kiss. It was brief and fleeting. It also gave me cold chills. We talked for a good while and then did the whole kiss thing right.

On our first "real" date I picked her up in the Trooper and we took off to find something to do. We hit Broadway and almost immediately got pulled over. I had a headlight out. I got a nice ticket and we laughed as we struggled to figure out what to do next. I hadn't bought the Monte Carlo yet. After a little talk we ended up playing Mortal Kombat vs. DC Universe for most of the rest of the night.

The Trooper did play a huge role in the beginning of our relationship. I guess the old girl is due repair. If nothing else it will make me smile turning the wrench and thinking of the good times the wife and I have had in the Trooper.
at September 24, 2010 No comments:

My wife's birthday is a month after our wedding anniversary to the day. For her birthday I came up with a jewelry box made of some very nice mahogany inlaid metal carved doors. The gift was based on the fact that for the last year my gifts of jewelry has been rather... generous.
For her birthday the year we met I bought her a Jane Seymour Open Heart pendant and necklace. Since then the necklace has not really been off her neck except for the one time that the clasp broke and we had to send it in for repair. I think she has really loved that necklace. I've bought her earrings and three rings from the set since then.
When this birthday rolled around she very specifically forbade me from buying jewelry. She none too subtle hint at what present to buy was," Don't buy me anymore jewelry. I don't have anywhere to keep it." How can a good husband resist a sales pitch with that much directness so unsubtle in its delivery?
Come to find out there is a formula to use when buying a woman you love a gift. In the case of the engagement ring, though I claim this is made up, the formula is simple. The engagement ring should cost three times as much as you make in a month. For all the guys out there objecting, I feel you. This is just the rule I was quoted... and followed. I sure wish I made less money monthly. Still I am rather proud of Ashley's rock.
For Valentine's day I believe in a simple theme. You buy candy, a card, flowers, and jewelry. I haven't always followed my formula. It has caused me trouble in the past when I haven't done things right. For the record, being a sour bastard and having hated Valentine's Day for years isn't a good excuse when you love a woman.

The jewelry box was a rather proud purchase. I knew she wanted it. It goes along with all the other things I have bought her. It all went well even with the pink wrapping paper... until my parents brought in their gift of a puppy Saint Bernard.

Buddy is adorable. He is  a joy to have around. We have spent most of our days since her birthday feeding, walking, petting, and just plain loving her present.

Which is all just to show there is always something to be learned about giving gifts. Always go with the cuddly, furry gift!.... just no more at my house!
at September 08, 2010 No comments: