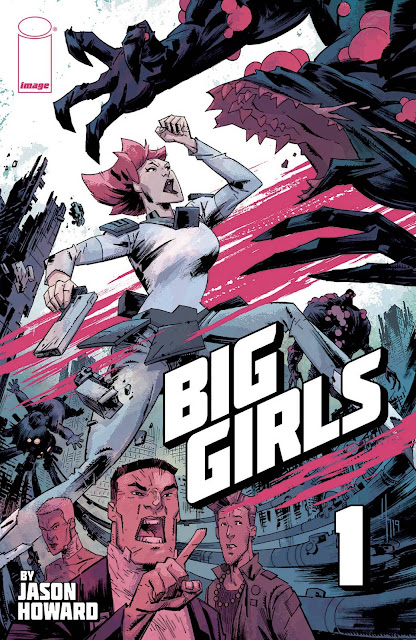 One of the best parts of being a comic book fan is discovering new comic books, new artists, and new writers. I have a confession to make. I have only started to pay attention to artists and writers in the past few years as a function of recording the podcast. I had always thought of knowing a creative team as unnecessary to the process of finding comic books that I loved.

I was wrong! As I have expanded my knowledge on comic book creators, I have come to appreciate different styles and talents. A Robert Kirtman horror story is a different comic than a Joe Hill horror story. You may enjoy a creator’s specific work regardless of genre, or you may prefer a specific genre of story.

Capes and tights are far and a way the biggest genre of comic book. There are also westerns, horror, mysteries, crime, romance, sci fi, and a whole host of others. There are not nearly enough Kaiju comic books. We could all use more giant robot and giant monster stories.

Writer and Artist Jason Howard has made the next great entry in the kaiju comic world. Big Girls from Image Comics is about a world where men and boys sometimes mutate into seemingly mindless, destructive behemoths. The world is ravaged by these creatures. All that can stand against them are giant women known as the Big Girls.

If the totality of Big Girls were the tag line on the back cover of the first issue,” Men are monsters destroying the world. Only girls can stop them. Big Girls,” it would be a great comic. When I saw the solicit in Previews that tag line grabbed me. I did not need to read more to know I was going to give Big Girls a shot.

Imagine my surprise when the first issue is full of an intriguing story of a world turned unexpectedly upside down by mutation. Ember, our Big Girl, protagonist finds herself helping High Marshall James Tannik investigate a man laying in an excessive amount of groceries.  The reader finds themselves watching in horror at a mutated toddler named Alan innocently kills some of Tannik’s men. The boy breaks his way through the wall of the high-rise apartment building and is caught by Ember which saves him from potentially plummeting to his death.

At this point the experienced and somewhat jaded comic book reader in me started theory crafting the rest of the story. Alan is different from all the other monsters. Ember forms a special bond. She helps mother the boy and together over the next several issues of the series the two hold off attacks from the monstrous kaiju while a cure is being developed.

Imagine my surprise when I turned the page and the High Marshall executes the boy by shooting him in the head.  The scene leaves the reader feeling just as shocked as our hero Ember. You see her sensitive, human side as she mourns for the slaying of the boy. Tannik is forced to put things into perspective for her explaining,” You are the fail-safe. The last line. But I am early detection. I cut the cancer out before it harms the patient.”

High Marshall Tannik is responsible for The Preserve. It is a place where unmutated humans can live a normal life while outside the protected walls The Jacks (an interesting name for the Kaiju) reign supreme. Maybe their noble mission, run from the Cube, really is as straight forward as protecting humanity from giant monstrous threats. Maybe not.

Naturally as Ember battles a Jack who has gotten surprisingly close to the Preserve undetected, we are introduced to Gulliver. She meets with Martin, Alan’s father, and reveals that she is making more Jacks for her Cause…whatever that is. This extra layer of complexity sets Big Girls above a fun monster slaying romp. It is one-part post-apocalyptic tale, one-part Kaiju, with a nice splash of science gone amok, and covert operations. Every character seems to have secrets and agendas.

I believe Jason Howard has done an excellent job with both the art and the writing in Big Girls. His style is perfect for the story he is telling. I am often charmed by books where one person is writing and illustrating. I think it adds a depth of story telling that is sometimes lost a bit in translation when the artist is interpreting the script.

I also believe that you can tell Jason Howard is a comic book fan. This is a book written by someone who not only loves the story they are telling, but also loves comic as an expressive medium. The book has good pacing, interesting characters, and intrigue. What could possibly motivate Gulliver, who clearly considers herself a victim of High Marshall Tannik, to make more Jacks?

I picked up Big Girls #1 yesterday, and I am already eagerly awaiting Issue #2. I believe it has the legs for at least a 12-issue run. As more characters are introduced, I think Jason Howard will continue to layer on pleasing and intriguing elements to the story. Nothing is quite as it seems which is a surprise for what I thought would be a story more along the lines of Attack of the 50-foot Woman.

I give Big Girls a 9 out of 10. Subverting my expectations counts for a lot. It is big fun without being simple minded, cheap, or depending on overt sexuality. If you haven’t picked up your copy of Big Girls, I suggest you do so soon. I expect it will sell out a first printing easily and you don’t want to miss out.