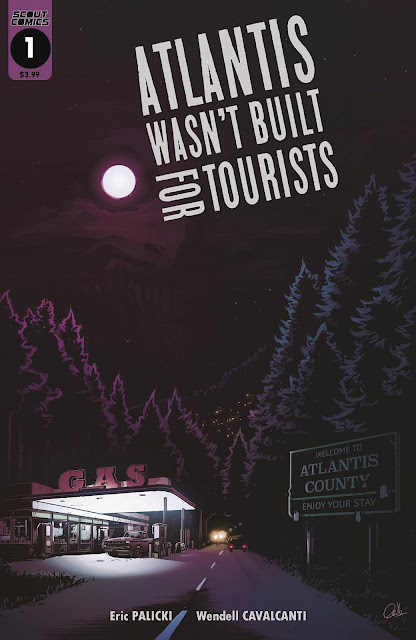 Urban fantasy is a growing genre. More and more people are finding pleasure in those strange tales that take the modern (or in some cases mostly modern) world we live in and give it a monstrous twist. It seems to be a niche that I really enjoy. Stephen King helped to carve a deep niche in the horror branch of urban fantasy.

There are a few tried and true tropes. The Magical Mystery Solver applies to titles like Harry Potter (after the first one), The Dresden Files, Anita Blake Hunter, Shadow Service, and The Iron Druid Chronicles. There are scores more out there. The basic setup for these types of stories is a magically gifted person making their way in the normal world using their extraordinary abilities to varying degrees of stealth and success. Inevitably their paranormal world clashes with the real world and the result is an intriguing narrative. I love this type of story.

Another take on the genre is the "normal" person bungling into the supernatural world. Stories like Where the Wild Things Are, Harry Potter and the Philosopher's Stone, Interview with the Vampire and Percy Jackson and the Olympians fall into this category. I will admit that most heroes thrust in above their heads in the supernatural world soon go on a journey of discovery and find that their new world was the right one for them all along because of either their innate or developed paranormal talents.

The very fact that you can identify so many common themes and elements from these types of stories speaks to both their popularity and the saturation of this type of story. In the past three weeks I have written reviews for Shadow Service, Cult of Dracula, and Seven Secrets (although Seven Secrets may or may not end up having supernatural elements). I am hungry for these types of stories. The more they break the formula the more I seem to enjoy them.

Atlantis Wasn't Built for Tourists from Scout Comics has defied my expectations. Granted, I am a wide-eyed, eager reader. Still, studying the cover art on the Previews left me the impression of a little mountain town. I don't know why I put the book in a rural part of the Midwest. I may or may not have gotten that right. The banner on the first page reads," Once upon a time in America." It could just as easily be set in rural Appalachia.

Now, I may be gullible, but when you put Atlantis in the title I begin thinking of the Lost City. I am plenty hungry for Lovecraftian tales of horrors from beyond the stars devouring the souls of humans driven mad. I couldn't quite reconcile what Atlantis Wasn't Built For Tourists was about from just the title and cover art.

I will give you, dear reader, a piece of advice. Stop reading my review now while you haven't stumbled across any spoilers. Don't go into this book knowing anything (a good practice to increase enjoyment of any story) Pick up the book with nothing spoiled for you. Then, armed with your own opinion, come see if you agree with what I took away from the book.

To encourage you, I am going to rate Atlantis Wasn't Built For Tourists earlier in the review than usual. I give it an 8 out of 10. It has some fun twists and turns. I will be reading all four issues of the series,and I don't expect to get anything but more excited as we take the journey together over the coming months. Go read it for yourself.

Are you still here? Seriously. Spoilers are coming from here on.

You have been warned.

The story opens on a guy walking down a curvy mountain road. He looks worn out from the road with stubble on his face and wrinkled clothing. A bleary eyed driver nearly runs him over. The pretty, young redheaded driver, Lauren, hits a tree and is clearly injured. Our hero, Lucas, has no service on his cellphone and is forced to carry her a couple of miles into town to get her help.

Lucas makes the hospital and starts quizzing a nurse about where he can find food and shelter. It isn't long until the stern faced sheriff arrives. The writer in me was pleased to find the Sheriff wasn't the typical overcompensating hard case. That old stereotype needs a fresh coat of paint.

Thankfully, writer Eric Palicki gives us both natural dialog in the form of banter between the Sheriff and Lucas Lewis and a reason for a friendlier lawman. Turns out Lauren is Sheriff Jensen's niece. Lucas has made a friend with his bravery, and it scores him a couch back at the station. You also get a little bit of ominous foreshadowing when you find out per city ordinance Atlantis has a curfew. The walk back to the station cranks up the weird when the kindly Sheriff puts down a sick dog that has the telltale double puncture wounds that just scream vampire. Soon to be undead, vampiric dogs? I am reading faster at this point.

The Sheriff shows more kindness by giving Lucas a pudding cup to go along with the crusty old couch. A bearded hippie looking fella named Frank takes the stage in the town lock up. Imagine Otis from the Andy Griffith show, but drawn to look like Tommy Chong. Talk of teaching Frank a lesson shows that our kindly Sheriff has some edge.

Lucas goes toe to toe with a vampire delivering a powerful punch that the vampire complains actually hurts. I cheered a bit. Then I was totally surprised to see that Lucas Lewis has transformed into some sort of lizard man. He promptly tears the head off of the vampire.

The story takes another twisty turn as Lucas parleys with the vampire clan and joins them. Their leader Jack seems impressed with Lucas. Their conversation sets up the idea that the shape changing Lucas is looking for a place to lie low. Atlantis fits the bill.

The next day finds Lucas slipping a soft drink vendor a little cash to make a phone call for him outside of town. Lucas makes his way back to the hospital to check on Lauren and confront her about the Sheriff having made a deal with the monsters. Finally, the book closes on an obviously female deputy blowing up the truck on a rural road with a well placed shot from a sniper rifle.

I love the fact that nothing is as it seems in Atlantis Wasn't Built for Tourists. Is Lucas Lewis a shape changing avenger bringing a little justice to a monster filled and prejudiced small town sort of like Rambo meets I, Frankenstein? Is Lucas about to be the biggest meanest monster in a town filled with them and the Sheriff is maintaining the Masquerade? Honestly, I don't know. I really like that fact. As much as I read, I like the believe that it is hard to keep me guessing. Good job, Eric Palicki.

The art for Atlantis Wasn't Built for Tourists is well done. The pairing of Wendell Cavalvanti's pencils and inks with Mark Dale's colors makes a great, well delivered work of art. I found myself revisiting pages and noticing changes from white to black backgrounds for the panels. Is this simply a change from daylight to darkness or does it subtly suggest the presence of good and evil? Just the fact that it was a subtle touch to the book is a credit to the creative team.

Having read through the first issue twice and flipped through looking at the art at least half a dozen times, I can say that Atlantis Wasn't Built for Tourists is a great addition to any comic book collection. The story was released previously from another publisher as a graphic novel. I am tempted to seek it out, but I am looking forward to a little bit of the tension of waiting for this to drop in the serial format. Granted, we are in for a bit of a wait. Issue #2 isn't out until October 14th!