Once again I missed something in Previews. Thankfully, Nirvana Comics, my Local Comic Shop is invested in the small (er) press comics. Garin, Richard, Brad, Grant, and Amber have influenced my comic book tastes by putting great independent titles in front of me from AWA Upshot, Scout, Vault, Ablaze, and Aftershock Comics.

Now that I have gotten more into small press titles, I really have a passion for them. More and more I look at what these companies are putting out. They are a great break away from capes and tights recycled stories, situations, and characters. When I built my pull list last week I zeroed in on Shadow Service. The high level concept I caught was James Bond meets Supernatural. 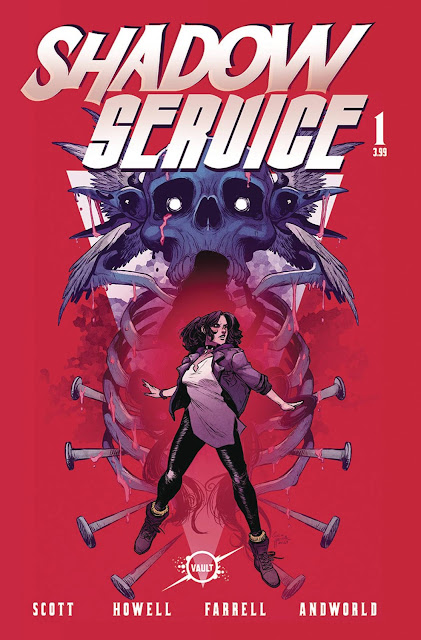 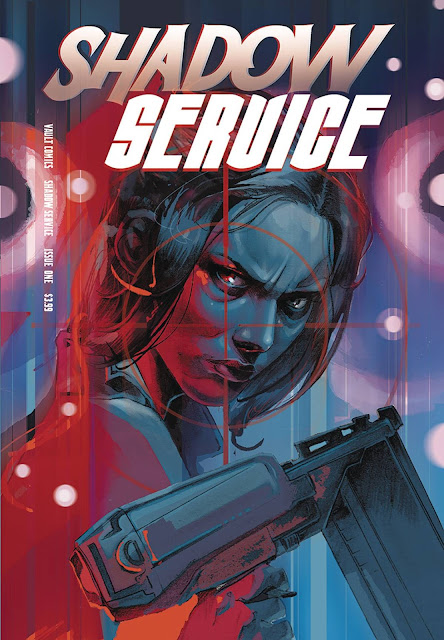 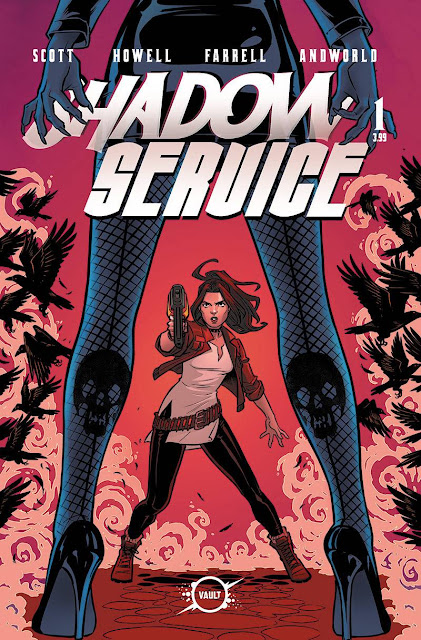 The nails and the nail gun really grabbed me. I picked up the B cover with the bullseye and the nail gun. I didn't know who our heroine was, but I know that the face she was making with that nail gun was going to lead to something spectacular in these pages. I was so right.

Shadow Service opens on Gina Meyer, a private investigator, tracking down Theo Grange. The douche nozzle is in the midst of assaulting a young woman in a bar. When Gina confronts him he hits her with a thrown bar stool and runs for it. He and the readers get a surprise at the same time.

To be fair, the reader meets a Gina's delightful friend Edwin. He seems know know all the trash and alleyways in London. He has his eat to the ground. He also is a talking rat. I was instantly in love with him. This leads into a horrifying flashback sequence where young Gina saves her mother from her abusive father using magic. The narrative break adds some details and conflict to the story while showing off how powerful Gina is potentially. There is a lot more to Gina Meyer than meets the eye.

When we come back to continuity, Gina crafts a thaumaturgial spell to bail Theo's foot to the ground. Imagine my pleasure that the nail gun from the cover plays a part in the actual story! That happens more often in independent comic cover art than it does with the big three.

Gina being a witch private investigator alone would have made a great story. I am a huge fan of the Harry Potter series, The Dresden Files, and The Iron Druid Chronicles among many other urban fantasy stories. On the basis of the story I disclosed up to this point, Shadow Service would hold my interest. It is so much more than that.

I am going to leave off telling the story there. I cannot call this a spoiler free review, but there are a couple of amazing twist and turns that writer Cavan Scott runs us through. Corin Howell's art has nice clean lines and fits the story. I will say again that I am a little bit of a comic book art snob. I will be looking to see more of Corin Howell's work. It is really quite good.

I think Shadow Service comes together with colorist Triona Farrell's contribution. From shadows and flushed cheeks to vibrant back ground the book really pops. Both Howell and Farrell contribute to a feast for the eyes.

I really could not find any fault with Shadow Service. I didn't find myself trying to predict the story. Nothing feels trite or hackneyed in a genre that is cluttered with so much similar material. I feel like there is a nice mythology being built without borrowing too heavily from any existing obvious folklore. The story is fresh and has me hungry for more.

I will give Shadow Service a 9.5 out of 10. I cannot wait for the next issue.