I missed Seven Secrets when it was solicited in Previews. I am lucky that my podcast partner and local comic shop person were a bit more vigilant. I am trying hard to diversify my comic book pull list by replacing some of my capes and tights books with independent books. When I was writing up my pull list for August 12th, I stumbled across Seven Secrets again.

From the main cover art, I was intrigued. I got the impression that the book would be about martial artists protecting secrets. The two characters on the cover are falling and being pursued by ninjas with red glowing eyes. The male character looks like a hipster version of a Viking complete with rune tattoos on his forearms. The female character looks to be of Asian or Indian descent with beautiful angular features and snow-white hair. She looks to be dressed as a trendy spy in fantastic combat boots. 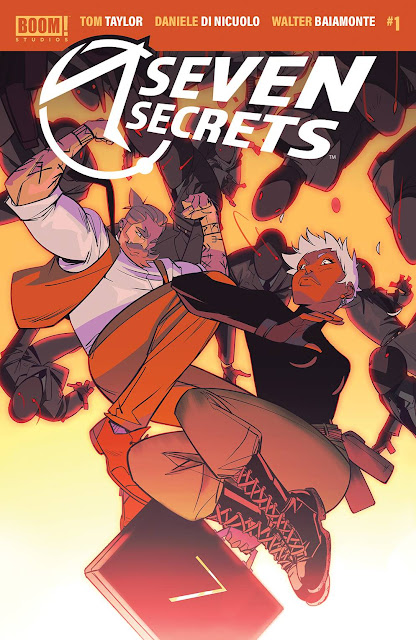 A nice-looking cover art will always sell me on picking up a first issue. All the elements were here to sell me on the book. Immediately, I bought in with the idea of figuring out what exactly the Seven Secrets are. Still, the podcast needs talking points for our previews episode. I wanted to know more without spoiling the book for myself or our listeners. Fair warning, if you read much further on this review, I am going to spoil Seven Secrets. I have not mastered the art of the spoiler free review yet.

The first thing I noticed about Seven Secrets after the cover art was the creative team. It is written by Tom Taylor. I could write pages about the things Tom Taylor has done that I have loved. DC capes and tights fans have likely fallen in love with DCeased, Injustice, and Earth 2. I absolutely devoured his work with Marvel on All New Wolverine. Yes. Tom Taylor gave us Honeybadger. Gabby is one of my favorite mutant super heroes. He has more than earned my trust as a writer, and that alone might have sold me on Seven Secrets.

Art counts for a lot. A professionally written story that is poorly illustrated will lose me faster than a terrible story with fantastic art. I gave the current Vampirella run a half dozen issues before succumbing to the nonsensical writing. Daniele Di Nicuolo is not a name I already knew. I loved his cover art for the first issue and was hopeful that his interior work would be of the same quality.

The fact that I didn’t know Daniele Di Nicuolo is my own short coming. He has done beautiful work on Boom! Studio’s Might Morphin Power Rangers. Even though I am not a Power Rangers fan, I have always been tempted by the artwork. For Marvel, Di Nicuolo did pencils and inks on West Coast Avengers in 2019. Again, this was a stunning book that I just did not read. I am grateful for Seven Secrets putting Di Nicuolo on my radar.

The art for Seven Secrets is stunning. In a scene where Eva is fleeing with her briefcase holding the secret she has sworn to protect, Eva is riding a motorcycle while calling for help on a cellphone. The sequence is so beautifully rendered you forget you are reading a comic and almost feel like you are watching a high-quality animated movie. I have been blown away by every page.

Tom Taylor has crafted an intriguing world for Seven Secrets full of interesting characters. Sigurd and Eva who I described in the cover art set a high standard for the rest of the cast. The book opens and the guardians seem to have already failed in their mission. The clock is then rolled back 3 months. Nonlinear story telling is not my favorite hook, but I can forgive it based on the quality of the rest of the story.

Turns out Eva and Sigurd have done the forbidden and while guarding their secret they have become romantically involved. Eva is pregnant. In a Fifteen Years Earlier flashback, you find out that Sigurd and Eva were put on trial for their sexual trespass and almost voted out of their positions as protectors of a Secret. At this point, their child becomes our narrator. This is a fun plot device and made me immediately long for the return of Saga. Our children are never perfect narrators of the events that lead to their existence and upbringing. Clearly, Eva and Sigurd’s child is going to be the real protagonist of the book.

Although Tijana and Gareth, leaders of the organization that protects the Secrets, are both jerks for their own reasons Sigurd and Eva are able to keep their jobs and fulfill their oath to protect their Secret at the cost of being able to raise their child. The kid is taken after birth and (I assume) is raised up to be a super bad ass guardian. Coming from Sigurd and Eva he must be fantastic. The emotional turmoil of the difficult decision to keep the Oath to protect the secret or to be an oath breaker and be able to raise your child is heart wrenching.

Flashing back to the 3 months ago continuity you meet Amon. He is a bad guy leader with gun toting ninja-like followers. He may be a little stereotypical in his smiling weasel faced presentation. He is wearing black and carrying a sword like a good Sephiroth clone should. I was incredibly pleased when Sigurd stabbed him. I was rightly upset with Amon decapitated Sigurd. I have known the guy for all of 20 pages, and already I was not ready for him to go. That is a credit to good writing and good art.

If you did not grab a copy of Seven Secrets you may have missed out on a first print copy through your local comic shop. Do not worry. It seems issue one has already gone to a third printing. I recommend adding Seven Secrets to your pull list. I only expect the story to get more compelling from here.

I give Seven Secrets an 8.5 out of 10. The jumps in continuity were not difficult to follow, but I am a bit prejudiced against it. I am not convinced of the virtue of telling a story out of order even when it is fun to have a 15-year-old boy talk about his conception and the trouble it got his parents into. I thoroughly enjoyed the book and cannot wait for more issues.